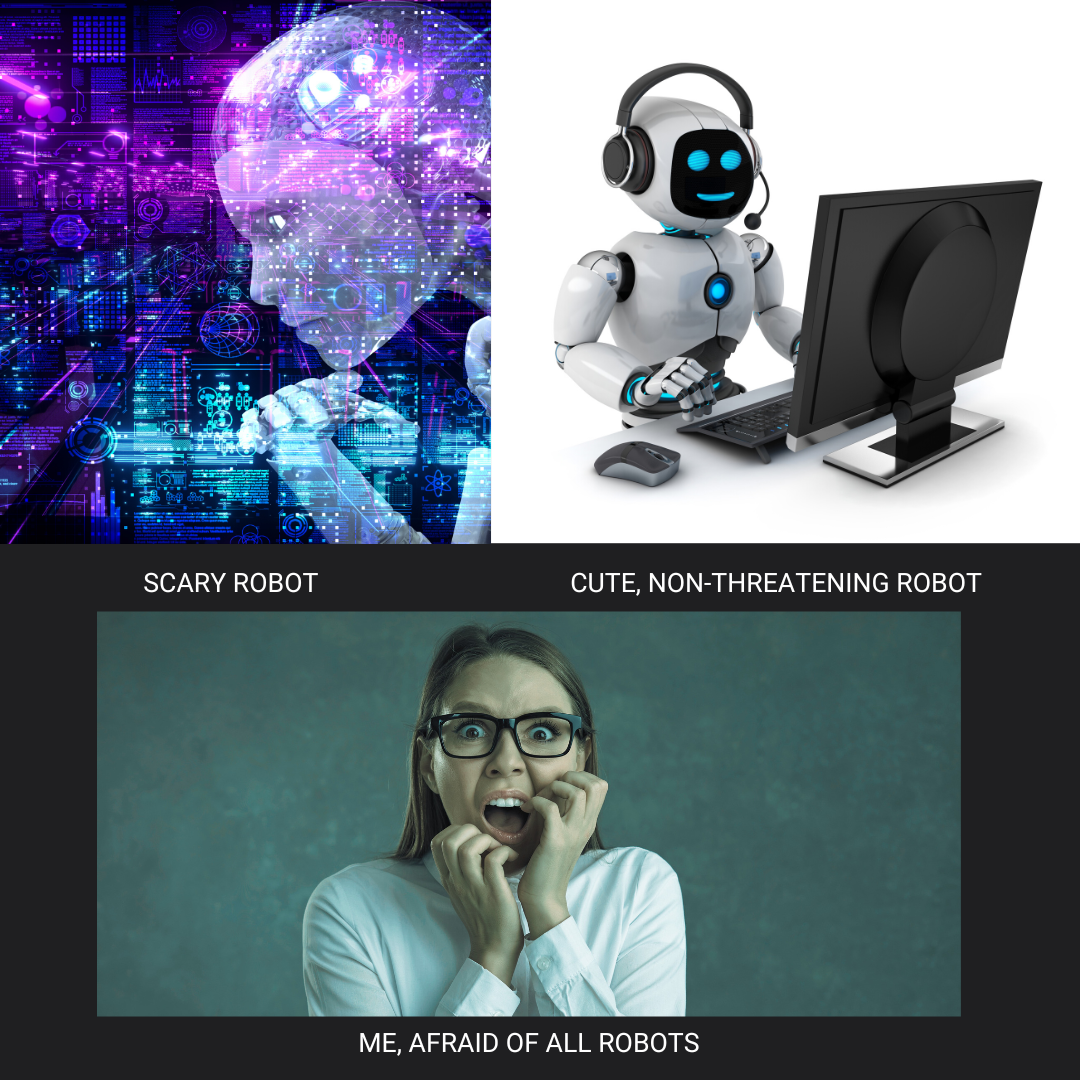 Are they coming for my job?

Lately, I’ve been thinking a lot about AI and machine learning. Like many people, I’ve bought into all the hype about these technologies. I’ve also bought into the uncertainty and fear surrounding these ideas. I’ll be honest, anything robot scares the crap out of me. Many years ago, I watched the episode “Succession” from one of my favorite TV shows of all time 30 Rock. In that episode, douchebag writer Frank explains the “uncanny valley” a theory by robotics professor Masahiro Mori about our reaction to lifelike robots. In an article, he hypothesized that a person’s response to a humanlike robot would abruptly shift from empathy to revulsion as it approached, but failed to attain, a lifelike appearance. Once I heard this theory I thought to myself, “this is exactly why I’m so creeped out by robots.”

But that’s not the only reason I’m scared of artificial intelligence. Like many people my age, I grew up on movies like Steven Spielberg’s “A.I. Artificial Intelligence,” a film that failed to make me gain empathy for child robots (even one’s as adorable as Haley Joel Osment). Of course, there was also “I, Robot,” a Will Smith movie where robots really do try to take over the world. And the classically creepy “2001: A Space Odyssey.” As humans, we love to demonize the things that we don’t understand, and new technologies tend to bring out everyone’s worst fears.

Recently, we’ve seen a lot of media and marketing about AI writing tools like Rytr, Jasper, and Quilbot. I literally can’t get on Instagram without seeing an ad for one of these tools. Much of the marketing is along the lines of “hate writing blogs and other content? We’ve got the answer.” As someone who relies on writing blogs and other content to make money, I’ve been seriously worried about these technologies putting me out of business. One could argue that freelance writers aren’t paid well enough anyway, and now you’re telling me that the robots are coming for my tiny piece of the pie?

Well… it’s a little more complicated than that.

A different take on AI

University of Washington Computational Linguistics Professor, Emily Bender has a different take on the idea that AI can master human language. Her article “On NYT Magazine on AI: Resist the Urge to be Impressed.” She says, “I end that talk by reminding the audience to not be too impressed, and to remember:

I believe one of her main points about AI is this, “humans are the ones creating these AI programs, and training them on things written by humans. Therefore, the output will sound like human language. But AI lacks the ability to create works of art in the way that humans do.” AI and machine learning are buzzwords, and these programs have a lot of marketing money behind them. But it doesn’t mean that they are all that they’re cracked up to be. Computers do what we tell them to do. If you train your AI on episodes of the show “Seinfeld” it will sound like Seinfeld. But it doesn’t make these robots into real comedy writers like Jerry Seinfeld or Larry David.

As we all know, marketing is a powerful tool. And many tech start-ups have the capital to make their products sound like they are the answer to all of your problems. As Bender says, “Puff pieces that fawn over what Silicon Valley techbros have done, with amassed capital and computing power, are not helping us get any closer to solutions to problems created by the deployment of so-called “AI”. On the contrary, they make it harder by refocusing attention on strawman problems.” Of course, the creators of these technologies want you to believe that they are better and more capable than they actually are, that’s the way that they make money.

Think of it this way, Ford Mustangs don’t make you any sexier (well, actually, they might), and buying everyone a Coke won’t make the world a better place. These are marketing campaigns to get you to buy these products. Technologies do change the world, but only in the ways that humans want them to.